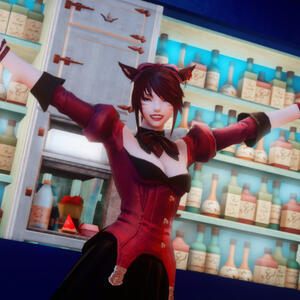 A young Mi'qote Sharlayan student, recently assigned to Eorzea to work on her graduating thesis on Eorzean nationalism through rising trade between the city-states. Deciding to make some income, she decided to take on some jobs as a bartender, like any student would... seeing Eorzea's nightlife and studying the world, one venue at a time!

Ruby is an experienced bartender, using the neutral position to observe wherever she works. From the small and intimate to the large and bustling, she takes notes and observes them all, learning and having fun at the same time!When encountered, she would appear friendly, outgoing, and bubbly. But inside her mind, she is studying everything: venues, team dynamics, compensation, organization, social norms, hierarchies, and anything else relevant she can get information on, all in the name of furthering her own understanding and Sharlayan's. In the name of furthering Sharlayan knowledge, she would study them all!

Born and raised in Old Sharlayan to a pair of Miqo'te parents running a successful business with alchemy as their trade, this young and inquisitive Miqo'te grew up in the company of scholars, academics, and students, befitting her nation's creed. More at home with books and staying indoors to study some esoteric tome or delve into a field of study, Ruby grew up a bookworm, all the way from early childhood up until her admittance and current enrollment in the prestigious Old Sharlayan's Studium. Eccentric to a degree, it is here that she decided to take on the last name of Quantize, a last name alias plucked from her studies in physics during her time in the Studium - ostensibly to protect her identity later on, as she would likely state if asked, and proceed to outright refuse to reveal her last name.There, she took up studying Economics, interested in a subject matter that can be applied almost universally - all communities and their leaders must take into account prosperity and what gives the most returns to make decisions, so if one understands the economics of a community or venture, one can almost reliably predict their future decisions. It is also here that she took classes in thaumaturgy, primarily due to her interest in the usage of magic for warfare, and secondly to arm herself with some basic offensive magic for self-defense. Aside from that, she also spends her free time studying several other subjects - namely military strategy, aetherology, and alchemy.For her graduating thesis, she is taking part in a foreign exchange program in Eorzea, where she elected to finish her studies by writing on the emergence of a united Eorzean spirit through rising trade and military cooperation between the three city-states. To that end, she has been assigned to Eorzea primarily to physically observe trade routes, talk with local trade guilds, and political leaders.Soon, her time in Eorzea will be up and she will graduate from the Studium with top marks owing to her inquisitive and bookworm nature, where she will be free to pursue whatever venture she fancies... most likely anything to do with studying something related to magic and aetherology, alchemy, or the development of a prosperous economic entity! 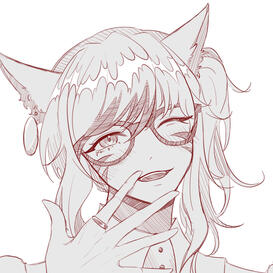 Bubbly
Ruby is inherently energetic and almost always in high spirits. She enjoys others who see the brighter side of life, believing that having a positive disposition allows one to fundamentally be able to deal with problems better; you become more creative, open-minded, and less likely to be locked in your own thinking. It also allows her to enjoy almost every moment of her life!Friendly
She always looks to others as potential friends she can make, and greatly enjoys others that are also friendly and kind. She generally dislikes those that lean towards cynical, rude, or self-centered dispositions without regard to others.Studious
Fundamentally curious, she loves to ask questions, and her best way to deal with anything she doesn't understand is to immediately read up on the subject or find someone who is experienced. If you pique her interest with a subject, or better yet she finds that you're an expert or are knowledgeable... be prepared for a barrage of questions and attention!Strategic & Ruthless
Despite her friendly and open personality, there is a side to her that she does not directly display. Some life experiences involving her family in early life have shaped her to believe that it is important to prioritize one's self, make decisions logically, and disdain emotion, believing it as an obstacle to clear thinking. When she has to, she will stop at nothing to secure her goals.When stressed or presented with a difficult situation, her mind becomes very strategic: she becomes ruthless, making decisions with herself and the people she cares about the most first in mind, and only then everyone else. This also applies when people ask her for input for their own problems - she will often think of solutions first, emotional comfort and morality second... or even considered irrelevant.

Knowledge Seeks No Man - A true Sharlayan, Ruby heeds the creed of her nation to heart. When coming into contact with something she does not yet understand, she becomes voracious - barrages of questions and great interest will follow anything or anyone that catches her interest.All her actions are driven by the primary motive of furthering her knowledge and understanding of the world, and to a larger extent, contribute to Sharlayan's own collective knowledge.Mhachi Mages & Black Magic - Classically trained in thaumaturgy for basic defense growing up in Sharlayan, by the time she was tasked to study in Eorzea, her hunger for knowledge has developed into a keen interest in Black Magic. Scouring books within the Studium, she came to the conclusion that her country's knowledge regarding this serious and dark lore could use further addition, and therefore she's made it her personal mission to hunt for as much information as she can during her travels in this field.Any mention of black magic lore or knowledge, or the history of Mhach and the Fifth Astral Era brought up in conversation would incite great interest from her.Scholars of Nym - Having read of the Fifth Astral Era and the historical events of the city-states of Amdapor, Nym, and Mhach of that time, she is greatly intrigued by the tactical acumen of the Nymian Royal Marines and their ability to fend off the numerically superior Mhachi void mages. Any mention of their arts, history, skills, or discussion on the matter will incite her interest.

IC/OOC Separation
All our interactions when IC are RP and do not translate to an OOC dynamic, and vice versa. Please do not conflate the two with bleeding. I do not bleed! We're all adults, it's all a story in the end; let's keep it fun and consensual without making things too serious OOC!18+
I am 21+, and I only RP with those above the age of 18+!Personality
Ruby and my personality OOC are a bit similar as it happens. I do not like to reveal OOC information in general unless I get to know someone and am comfortable with them.I'm also a very private person. I prefer my connections with others to be very personalized - that is, I will treat others how they treat me, and I am against those that talk negatively or ill of others. If I find that someone spends a lot of time talking ill of others for no good reason, that's a fast way of making me lose interest in interacting with them.If you want to talk about something or have concerns, feel free to shoot me a DM!Personal RP Approach
I have a great dislike for drama or anything and anyone that involves conflict (OOC, that is. IC conflict and stories are fine.) I have a zero-tolerance approach to bleeders. I do not bleed. Anyone that I feel I cannot trust to keep IC and OOC separate, I will terminate my connection with them. Let's chill out, it's a video game and we're here to have fun - doesn't have to be complicated.OOC, I'm a relatively chill individual. I enjoy others that are also chill and kind, empathetic, and supportive of each other. To not be too serious about things, have fun together, and bring each other up.IC, I'm interested in more Adventure RP-type stuff at the moment. Combat, adventures, character development, gaining skills, etc. If you're interested in the same thing, hit me up! 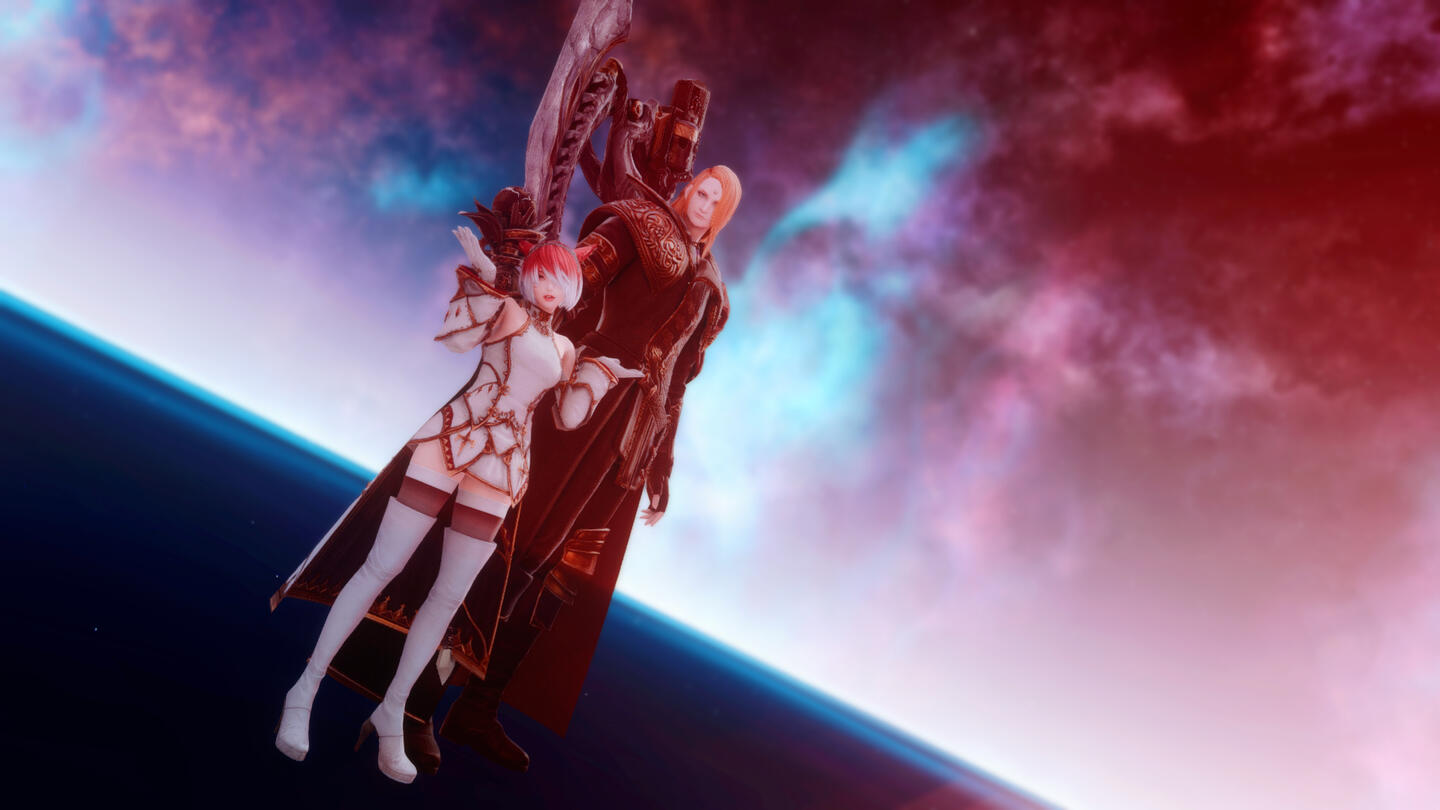